My son and I went on a trip last week to St. Louis, to visit my parents and friends.  On our second day we visited my friend Alexandra.  About a block from her house I heard Moshe coughing in the backseat.  I thought to myself, “Oh, he just took an extra-big swig of water.”  Then I realized that he couldn’t have been, because he had been drinking milk and I had anyways confiscated his bottle ten minutes prior.  I took a look in the rear-view mirror only to see my son yakking all over himself.  Repeatedly.  Poor thing!

Assessing the situation, I remembered that he had done this once before after drinking far too full of a bottle and snacking too much (I am guilty of using food as bribery while traveling with the toddler), and since he wasn’t feverish, I decided to stay on course.

However, he was covered in regurgitated milk (gross).  For immediate damage control, I wiped up what I could with a bib I had brought along.  For the more long-term, I called my friend (who doesn’t have kids but was very, VERY understanding) and asked if she could bring down a mostly damp towel. 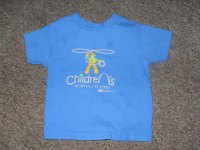 We wiped down the baby, stripped off the soiled clothes and carseat cover and tossed it all in the wash.  I wiped down the plastic frame of the carseat with multiple paper towels.  Then, since she lives in the Central West End of St. Louis, we trekked over to Children’s Hospital with my baby, clad only in diaper, socks and shoes, and purchased a t-shirt at their gift store.

Kudos to Alexandra, who was a trooper through the whole event.  She made a comment at one point to the effect of how mommies need to be quite flexible.  It’s true.  We were only planning to get some coffee and shmooze, but in the end, in was a whole adventure!