It’s been really hot lately.  So hot that my usual getting-out-of-the-house activities are not an option. Going for a walk? No thank you. Playing in the park? Not unless I want heat stroke. Other (free) indoor activities, such as going to the grocery store or library, haven’t panned out so well, as I haven’t always felt up to the task of managing both kids in a public place, especially after a few choice tantrums (not thrown by me).

So we’ve been a little cooped up, and everyone’s been increasingly stir-crazy.  I’ve been experiencing the joys of a teething baby (four teeth at one time), missed the boat on sending my toddler to day camp (boy do I regret that indecision), and in general, am feeling the need for space in a big way.

This means that when the kids are playing nicely on their own (which happens so infrequently that its occurrence makes me wonder if I’m not hallucinating), I don’t run so fast to see what they’re doing.  I know that if they’re quiet, it very well may mean a mess to clean up later, but I’m just so happy for the respite that I hope for the best (even though I know that’s a bit of wishful thinking). 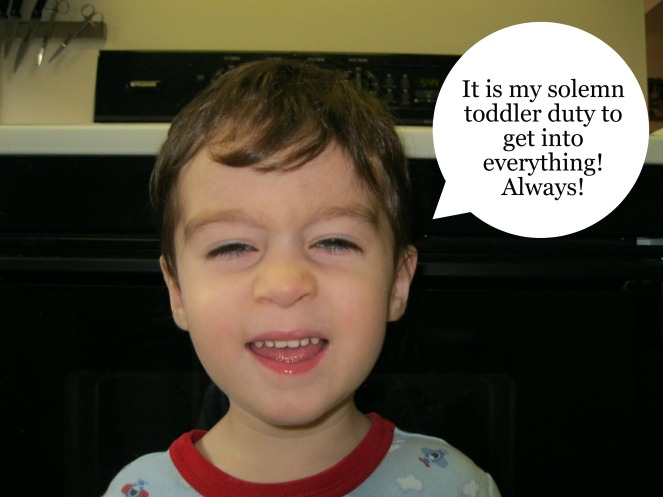 This is a story of how reality squashed my wishful thinking.

Last week, early into the Nine Days, I decided to self-clean my oven so I could make some milchig dinners in the oven for a change (I only have the stove-top at my disposal since our toaster oven finally gave out). I turned on the self-clean in the late afternoon, while the kids were still awake and playing relatively quietly in their room.  The oven door automatically locks during the cleaning, which sure is a nice feature, and let me relax to some degree.  I was doing this that or the other around the house when the smell of burning plastic wafted over to my nose.

My first thought was that maybe the pots and pans stored in the drawer under the stove were getting too hot, so I opened the drawer and removed them.  They were warm, but nowhere near warm enough for melting plastic.  I sniffed each one (yes, I did) as I placed it on the floor, but that smell was not coming from any of them. 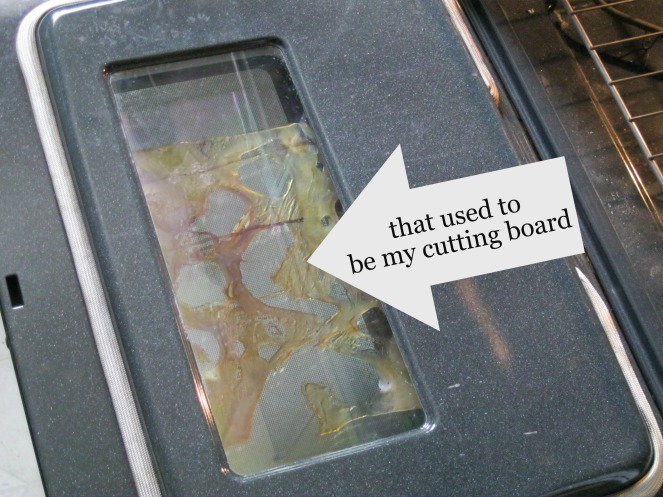 Did you know that on certain stoves, there’s a little teeny crack in the top of the oven door? It leads to a space between the outer glass and the inner, double pane.  It’s for ventilation, apparently.  I was unaware that this tiny yet hugely problematic space existed.  My toddler, with his unquenchable curiosity, had clearly discovered it. 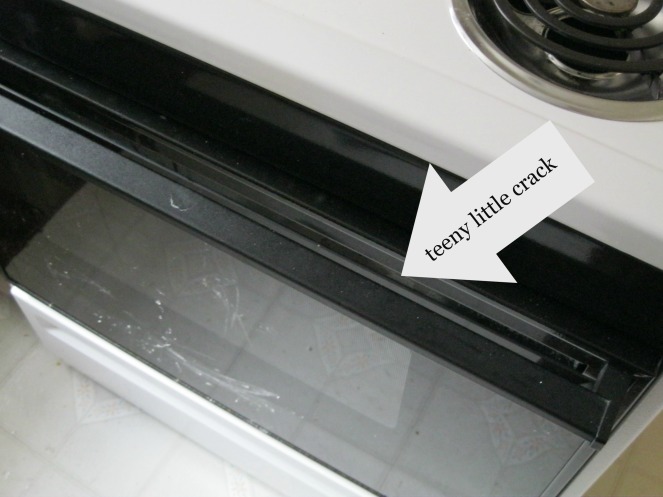 My reconstructed scenario went something like this:  He had opened the dishwasher, pulled out the cutting board and inserted it into this enticing little oven door crevice.  I don’t know when he did it. Sometime that day. And now said cutting board was quickly fusing to my oven door, and smoking up my kitchen.

So, I turned off the self-clean.  No baked ziti for us that night.

Later that evening, when the boys were safely asleep in their cribs, and the smell of plastic gone from my apartment, I took a look at the oven door.  It was still mildly warm, and I thought that perhaps I could scrape the cutting board off the glass. I found a wire hanger and bent it into a useful (I hoped) shape. After attempting to scrape around in there, I realized that I was probably just pushing more plastic down into the oven door than removing it, and I gave up on that idea. 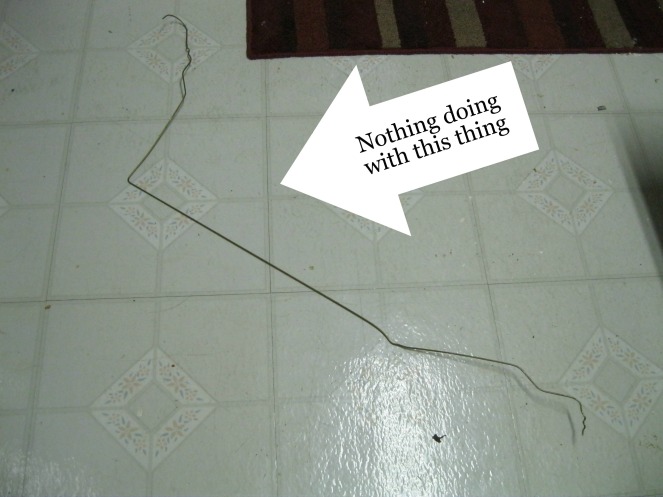 The next logical step, was, of course, to take the oven door completely apart.  Right?  ‘Cause that’s the most reasonable course of action.  Also, my husband wasn’t home to talk any sense into me.  I got out the big guns:  my toolbox.  Time to get handy. 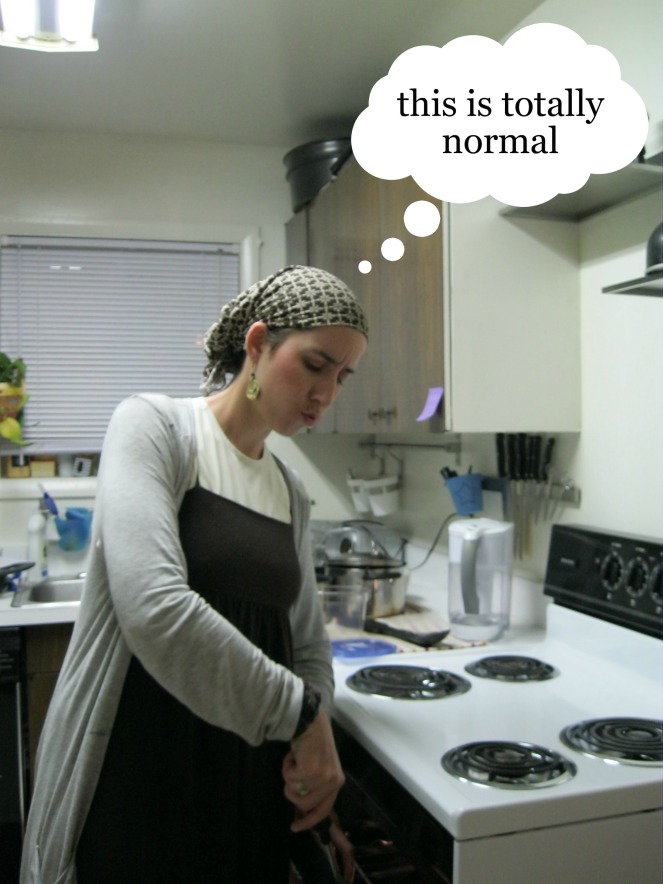 While I was removing the screws from the door, I did have the foresight to arrange them carefully in their respective order.  Perhaps it wasn’t necessary, but I didn’t want to be stuck with a disassembled stove and no idea of what went where.  Plus I liked having control over some part of this crazy stove situation. 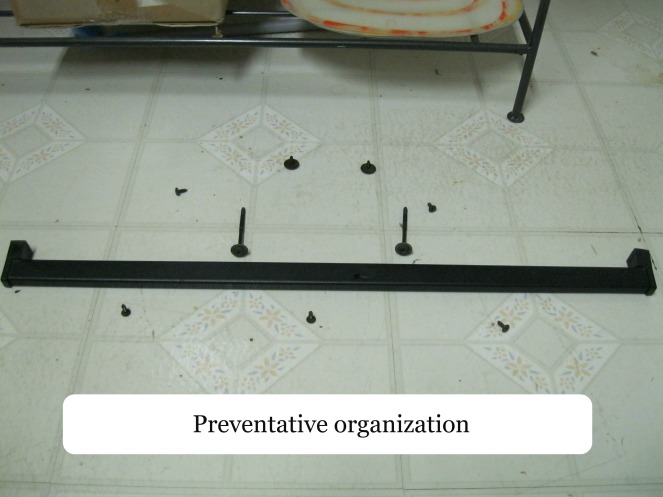 After the door front was removed, I assessed the damage.  It was not pretty. There was no way I was going to be able to separate the plastic from the glass. It was baked neatly in between the two inner panes of glass.  Despite my frustration, it was actually kind of impressive. 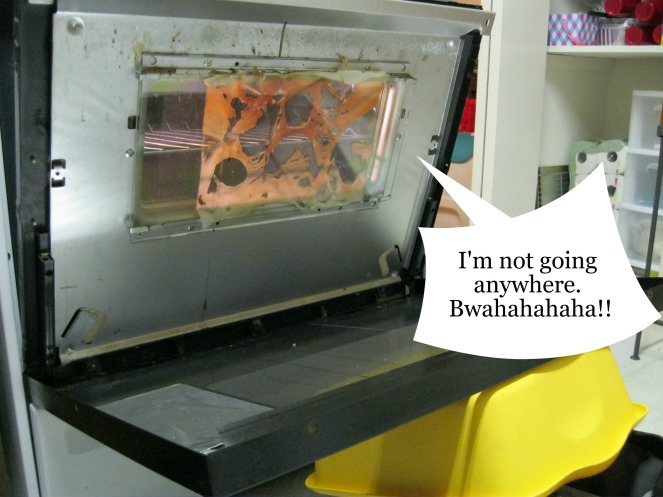 The most reasonable next step was removing the plastic-covered glass from my oven (right?).  Ostensibly, this was so I could show it to the Home Depot guys to get a new one, but really, I think I was just having a little too much fun taking things apart (who, me?).  And maybe I was hoping a little bit that if I just took out the offending plastic/glass combo, I could still make baked ziti the next day. 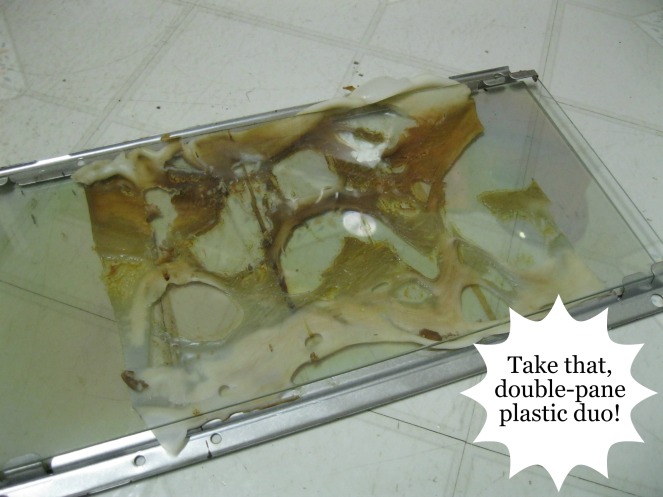 I reassembled the oven door rather uneventfully, and was really hoping that I could use the oven soonish.  However, when I asked the men at a nearby appliance store if I could use my oven without that part, they told me ominously of wasted heat, burnt little hands and shattering glass.  Yikes.  So, no baked ziti for us. Now I just need to order the part … until then, stove-top cooking it is! I’ll take any good stove-top recipes you have to offer.

Also, we put up a gate to the kitchen.  Best decision this summer.

You may also enjoy:

40 thoughts on “Why gating the kitchen is great idea, or, the day I took my stove apart”

What I Write About

There was an error retrieving images from Instagram. An attempt will be remade in a few minutes.

Support Neve while Shopping on Amazon!