“Now that I have three [kids] I have no idea how you look put together, write blog posts, practice music, buy groceries, eat, sleep, drink, etc. Any tips?”

What a nice message to receive!  My ego got a sorely needed boost.  What’s that, you say?  Well, most of the time, when I think of my life, I see a list of things that still need to be done, or that I could do better.  These are the types of things I will notice and dwell on:

It is my nature to focus on what’s lacking, what could be better, what “should” be done.  This is something that I’ve been working on channeling into healthy motivation instead of a crushing guilt.

Something that’s been very helpful in quieting that voice that says “you aren’t doing enough!  slacker!  lazybones!” is developing a sort of flexible but consistent routine for the week.  This routine has evolved over the past two years or so, and I’m sure it will continue to evolve as my family’s (and my own) needs change.

Oh, how I love structure!

When I’m on schedule, it gives me the structure I need to be able to pursue the creative opportunities I crave without feeling like I’m throwing my family under the bus (funny how they still want to be fed even when I have a big gig to prepare for).

There will always be weeks that are less productive, or even disastrous, leaving me vulnerable to believing that negative voice.  A routine provides stability for at least some weeks where I’m able to maximize my energy and productivity, leaving me feeling pretty good about myself.

When I’m really on it, even during an “off” week I can focus on the progress I’ve made over the past years of learning how to be a wife and mother.  So even when the house is trashed, no clean outfits are easily found, the ingredients for lunch and dinner are sparse and the kids are watching too much whatever, I can still reassure myself that:

It also helps to think of some concrete examples of mundane things that I’ve struggled with in the past, like how I never thought I would get my kids to stop using pacifiers, but here we are, pacifier free for at least eight months.

Or how, when I was first married, I wouldn’t even think about dinner until 4pm when I would open a cookbook, pick out dinner, make a shopping list, run out to the store, usually more than one store, and I would only start dinner after all that!

If I tried that now, it would be trouble.  Three tired kids and one tired mommy at the store?  No thank you.  So now I just keep some quick dinners in the freezer, like Dr. Praeger’s breaded fishies or even frozen pizza, to whip out on nights when dinner needs to be fast and easy.

Anyways, what I’m really trying to say is that it’s easy to look at other people and think that they have it all together.

Being that we all have different strengths, abilities and purposes, the thing to do is to find a balance between maximizing your energy and having realistic expectations of how much you can accomplish considering your life circumstances.  My youngest is almost two and is fairly independent, so I can get a lot more done right now than I could when she was an infant.  Sometimes we can do a lot, sometimes we need to tread water.

I learned in Rabbi Aryeh Nivin’s chabura about the importance of having realistic expectations.  It used to be that I expected to be able to do everything I wanted and to do it in the best possible way.  Yeah, that didn’t work out so well for me. I was frustrated and felt like a failure a lot of the time.  So now I’ve learned to say no, or “not right now” to things, including to my own desires.  I’ve learned to cut back when it gets to be too much.

How do you know when it’s too much?

For me, it’s when I start getting really frustrated by little mundane things that my kids or husband are doing, or if I’m being excessively hard on myself.  That’s when I know that it’s time to step back and assess if I’m trying to do too much.  Sometimes it can take me a couple weeks, or even more, to realize that I need to cut back.  I’m working on that.  It’s gotten a lot easier to do the more I’ve focused on it.

So if you feel like you’re swamped and drowning and not reaching the goals you want, or not living life how you would like to, before getting down on yourself or trying to develop of plan of how to improve, take a moment to just give yourself credit for what you are doing already.  You may be surprised at how much you’re already accomplishing.

And now for some pictures completely unrelated to the post, because it’s been a while. 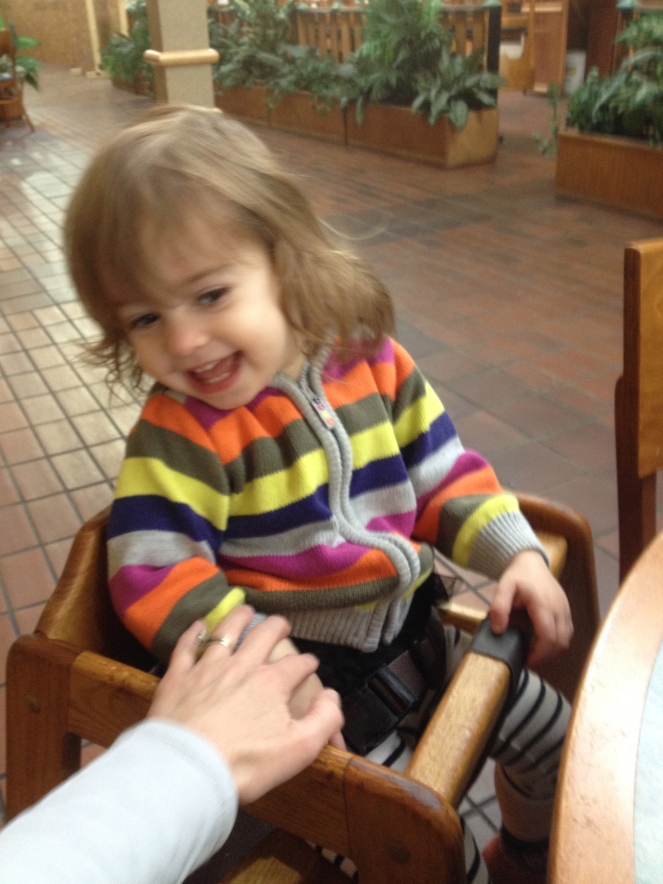 For those of you who want a more concrete example of how I get stuff like blogging and music done while my three kids are small, here’s basically what a week looks like:

Sundays are chilled out, staying in our pajamas until the afternoon kind of days.  If I have the energy and the weather is good, I’ll take the kids to a park or some outside activity (though it’s getting warm out now, so that’s going to turn into our morning activity – bye bye lazy pajama days!).  Dinner is usually leftovers from Shabbos, or in the unlikely event that there’s not leftovers, I’ll pull something from the freezer.

Mondays and Tuesdays are the days where I can usually get some sort of creative work (like transcribing this) or practical work (like putting away the winter clothes and bringing out the spring/summer ones).  Today I tackled the pile o’ stuff in the corner of my room.  If I had *really* been on it, I would’ve taken before and after pictures.  I’m afraid you’ll just have to use your imagination on this one.  Dinner is sometimes still Shabbos leftovers and either a crockpot dinner or something from the freezer.

Wednesdays are typically grocery day.  I try to only go once a week, unless I annoyingly need some staple like milk or bread.  But I really don’t like going more than once.  Now that it’s Farmer’s Market season, that might change, but I still have to sort that out.  Dinner is hopefully leftovers from Tuesday, but if not, I’ll usually do something very, very simple.  Like hot dogs, or noodles.

Thursdays are the day that I always tell myself I’m going to start cooking for Shabbos.  Lately it’s been the day that I do nothing I planned because I’m exhausted from the week.  So I guess this is either my cook for Shabbos day or relax and recharge day.  Dinner is usually a dairy meal, almost always noodles, though I would love to hear some suggestions on non-noodle based dairy dinners.

Fridays are definitely Shabbos prep day (’cause, this).  I like to be mostly done with the cooking before my oldest is done with school at 2pm, but that only happens when I actually cook on Thursday.  I usually spend most of my day in the kitchen and picking up the house, if not outright cleaning (I’m talking mop and bucket, folks).

Shabbos is Shabbos.  I do my resting thing.  Even though I’m busy serving, clearing, etc., it’s still so nice to have a day where I don’t have to do anything except spend time with my family and friends, old and new.

10 thoughts on “Give Yourself the Credit You’re Due”