{Did you know that I’m doing a daily video series for the month of Elul?  Very, very short videos (less than two minutes long).  You can subscribe to my YouTube channel, or see them on my blog’s Facebook page (if Facebook decides to reveal them to you), or on Twitter, or contact me to be added to the email list.}

The other week at the zoo I had an experience which gave me pause.  Due to a ill-timed discovery of a flat stroller tire (like, I discovered it after arriving at the zoo and packing all our stuff into said stroller), I found myself shlepping up to the front entrance, two massive bags of supplies on my shoulder, a squirmy two-year-old in my arms, and two excited little boys hovering around my maxi skirt.  About two feet beside and slightly behind me was a grandmother (I assume) with two granddaughters (also assumed).  Facing both of us, about five away, was a woman approximately my age.

This woman stood before us, looking first at me, then at the presumed grandmother.  After a quick deliberation, she approached the grandmother and said,

“Are you purchasing tickets for admission? I have this coupon for 10% off, and I totally forgot to use it!”

Thanks and pleasantries were exchanged before the coupon-donater turned and hurried back to where she came from, muttering something about leaving her children unattended.

It felt…weird.  I had the distinct impression that I had been assessed and then rejected for this coupon opportunity.  And all well within earshot, to boot.

One of my friends did point out, in a very nice benefit-of-the-doubt sort of way, that it’s likely the coupon-holding lady assumed that I already had a membership to the zoo, what with the gaggle of small children hovering around me.  Fair enough.

But it’s hard not to assume that my appearance might have had something to do with it.  I’m well-aware that with my long sleeves (well, sleeves past my elbow, at least), maxi skirt and tichel, which is my go-to headgear when I’m out and about solo, I don’t exactly look like the moms in Parents magazine.  I get how someone could see me and think, “Oh, that looks like one of those religious fundamentalist people,” and then not feel 100% comfortable approaching me.  I get that.  I’m not offended.

But this experience got me thinking about how it’s normal for most people to feel more comfortable with those who are similar to them than to  those who are different.  We naturally gravitate towards those who have something in common with us, who we understand and, in turn feel understood by.

But when we neglect to interact with those who are different than us, it can lead to distrust, distortion of (sometimes baseless) stereotypes and other unpleasant things.  I’ve seen this on both sides of the religious fence, from when I was younger and either irreligious or anti-religious, and shunned/mocked those who were open about having faith, and now, having been Orthodox for about ten years, and seeing distrust from some within the Orthodox community toward those who do not hold the same beliefs.

It may feel nice to have our beliefs be constantly validated by those who think more or less exactly like us, but in doing so, we miss out on a very important opportunity to critically assess our own beliefs, or to develop the ability to find commonality with those who are different than us.  In Pirkei Avos (chapter 4, mishnah 1a), it says “Who is wise?  One who learns from all people.”

I do find it somewhat ironic that it took me becoming Orthodox, which I previously (pre-exposure to any actual Orthodox people, that is) viewed as a very narrow-minded lifestyle, to acquire the perspective of being open-minded and respectful of others.  Does this  mean I agree with every opinion I encounter?  No, not so much.  But it does mean that I’ve learned the value of looking past an opinion I disagree with to see the human being behind that opinion. 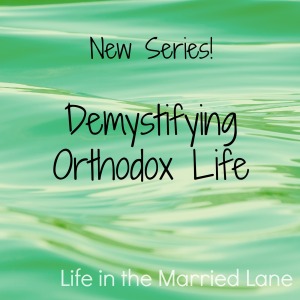 A reader of this blog and fellow blogger herself, Keshet Starr, emailed me some months ago with a great idea:  What if we put together a panel of frum women who would field some FAQs and share their experiences of what it’s like being Orthodox?  Yes, please!

I’m so excited to announce that our first post, G-d willing, will be published sometime next week.  If you have a question that you’ve always wondered about Orthodox stuff, here’s your chance to get it answered!  Just write me an email, contact me on my blog’s Facebook page, or even send me a tweet.  If you’re Orthodox, you can still participate, too.  If you have any question about frum life, send it this way.

We’ve put together a group of observant women who are hopefully somewhat representative of the diversity within Orthodoxy (yes, there is diversity within this relatively small subgroup of Jews), and they have generously agreed to share their thoughts and opinions on whatever questions are posed.

Looking forward to breaking down some of the walls and/or misconceptions that may exist, and on learning from both the questions asked and the answers given!

What I Write About

Support Neve while Shopping on Amazon!