I know it’s a little crazy to be sitting at my computer typing right now, but I’m in that honeymoon phase of having a baby where the sleep deprivation is enough to make me feel loopy and creative but not completely destroyed.  That’s usually next week and/or the week after, from previous experience.

There’s also an incentive to get this baby’s birth story down before it retreats into the fuzzy annals of my increasingly crowded (and unreliable) memory.  My parents are here to help (for which I am inexpressibly grateful), my husband has paternity leave (it exists!!), and so I have this little, teeny-tiny window of time to gather what I can of my thoughts.

And I’m taking it.

As you may recall, I had a finely calibrated timeline of when the optimal point for going into labor would be.  Well, this baby is certainly a gentleman, for not only did he wait for my husband’s paternity leave to begin and my parents to arrive, but he even let me eat the whole Thanksgiving meal (which we actually ate on Thanksgiving this year) before making his appearance.  How considerate!

After dinner and bedtime, my husband and I idly mused that tonight would be the night to go into labor if my pattern were to hold true.  We both settled in for sleep (well, I actually settled in to watch some mindless romcom because I was a little too jazzed up to actually sleep).  Around 11:30 I started feeling some contractions that were maybe something.

They were consistent but kind of short and wimpy.  However, having heard numerous stories about people who have given birth a) in triage b) in their car c) in their bathtub, I was wary of waiting too long to go to the hospital.

My general birth plan was to check in, see how labor was going, and get an epidural before I progressed too quickly (Alison, if you’re reading this, every time I’ve gotten an epidural I think of you and feel a little guilty).  I was sure I would go quickly, based on past experiences and all the birth stories people have shared with me.

Around 12:30 I made one of my frequent nocturnal trips to the bathroom and noticed with some excitement that my mucus plug had come out.  Because I was excited and hopeful, I woke my husband.

I was excited and hopeful until the internet told me that losing your mucus plug wasn’t an indicator of imminent labor.  In fact, it could even be a few days before labor begins!  These are the moments when I kind of hate having so much information at my fingertips.

We stayed up, scrutinizing every contraction, making conditions like “okay, if I have two more strong ones, we’re going to the hospital.”  We were both nervous about not getting there in time.  Maybe my husband was even more nervous that I was (he would be, after all, the one delivering the baby in the bathtub/car/hospital lobby).

Finally, around two in the morning, we decided to go to the hospital, and if it wasn’t labor, fine.  If it was, great.  I felt a little foolish for being so unsure of whether or not I was in active labor.  One would think that the fourth time around, it would be less ambiguous.

Triage was a little disappointing because even though I was dilated to four centimeters, my contractions were apparently not very convincing.  The nurse told me in an unconcerned manner, “eh, you could walk around a little in the halls if you want.”  But I was not really interested in walking around.  I was interested in getting down to business.

So we got down to business.  It turned out that the anesthesiologist was immediately available, and so I got my epidural as soon as I was situated in the L&D room.  We settled in for what we both were sure was going to be a five-hour experience.

At first, it seemed promising.  I progressed from four to five fairly quickly.  And then we waited.  And waited.  And waited.  I was stuck at five for seven hours.  And since I was hooked up to all manner of wires and tubes and what have you, and couldn’t feel my left thigh, I was immobile and uncomfortable.  And I had an annoying pain in my right side, not really related to labor, but distracting and bothersome.

After so many hours of no progression, I started to get worried.  What happened to the whole going from five to ten in an hour like my previous births?  What happened to my body being an efficient birthing machine?  Did I make a huge miscalculation this time around in getting the epidural so soon?

The nurse started to tell me about how the uterus can get lazy after a few pregnancies and not really want to do its thing.

WAIT.  WHAT?  Why had I never heard of this lazy uterus business before?  All the anecdotes I remember hearing were heavy on the “the more babies the faster the labor side.”  No one told me, “oh, hey, yeah, it might actually be longer and slower, so factor that in.”

My OB-GYN came in around ten and told me she wanted to break my water, to try to get things going a little faster.  Even though I had some vague thoughts about the slippery slope of intervention and how I did this to myself by getting an epidural too early on and blah blah blah, I gave her the go-ahead.

It was actually somewhat pleasant to feel all that warm water spilling out (even though, really, that should be super gross, and maybe now you all think I’m gross but whatever.  It’s a birth story).  My doctor went off to do a C-section and told me that she’d be back to check on me when she was done.

Remember that whole going from five to ten thing my body usually does?  Well, it started doing it. Thankfully.  Wonderfully.  Finally.  Problem was, I was feeling it.  And by “it” I mean the intense, toe-curling, side-rail grabbing contractions that precede transition.  As in, the very reason I’d chosen to get an epidural.  As in, the exact thing I was trying to avoid feeling.

We summoned the anesthesiologist, who gave me another one-up of something strong, and then languidly told me that if the pain relief wasn’t working, we might need to insert a new catheter.  That’s medical speak for “we might need to put that four-inch needle back into your spine and try a new spot!  While you’re dealing with intense contractions!”

It was irrelevant anyways because guess what!  Things were really moving along!  My doctor was still in her C-section, and so the doctor on call and a midwife were paged and made their appearance pretty much right before I felt the urge to push.  The midwife checked me and noted that while I was only at nine centimeters, the baby was right there, and I could probably just go for it.

(Please note that there was much screaming and general crankiness from me at this point.  I inadvertently hit the call button during transition and, over the intercom, the desk nurse asked if she could help me and I roared, “YOU CAN GET THIS BABY OUT OF ME!!!”  I definitely yelled some other things, too.  It was very intense.)

Just two pushes and our new baby boy was out and hollering at the world.  I was enormously relieved.  And grateful.  And astonished that I got to experience natural labor again without any of the benefits.  Like mobility.  Or mental preparedness.

So what did I learn from this whole thing?

It was very humbling to be reminded that no matter our plans or expectations, things are just going to happen the way they are supposed to happen.  There is no such thing as coincidence or happenstance.  For whatever reason, I was supposed to experience the pain of labor.  On my back.  With a numb leg.

And that’s how it is sometimes.  We can take precautions to avoid pain or discomfort, and despite our best intentions, the pain can blindside us.  And so instead of lamenting our “bad luck” at experiencing the pain, we can simply accept that it is happening, it is the reality of the moment, and push through it.  Grow from it.

At the end of the day, all I really wanted was a healthy baby and a healthy me.  And, thank G-d, I got exactly that.  So it didn’t happen quite the way I expected.  Fine.  I will take my abundant blessings and say “thank You,” and I will take the pain as a kapparah, an atonement.

Because this little guy is totally worth it.

Plus I got to keep this cute hat.  There are hospital volunteers who knit them for the babies, and they are ours to keep.  Love it. 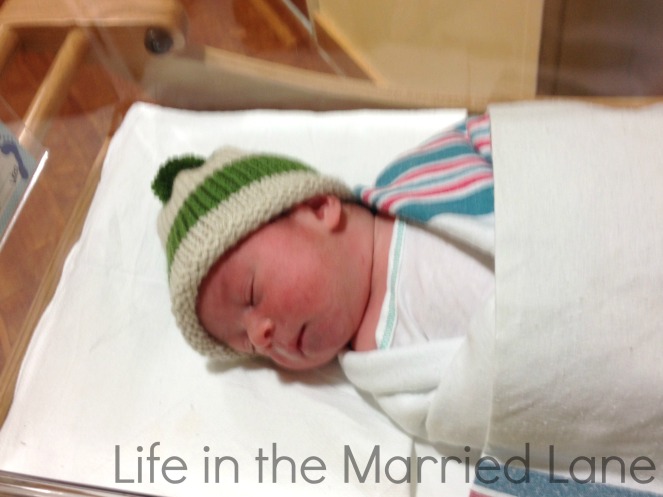