Yesterday was the English anniversary of the day I converted to Judaism. It’s been ten years. That’s the kind of milestone that leads to introspection. And I did introspect yesterday, for about twenty seconds before my attention got pulled in a million different directions, as usual.

Today, since I have a lot of household tasks to do, naturally I’m turning to writing to procrastinate those mundane tasks and reflect on what the past ten years have brought me, what they have contained, both in blessings and in challenges (which are really also blessings, but I digress). 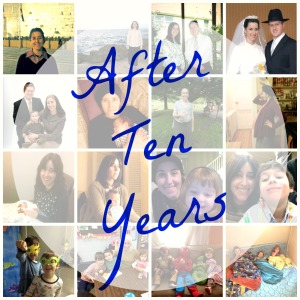 After ten years I see how Jewish thoughts and actions have made me a much more decent human being. Some of you might have been able to access your inherent decency without the structure of mussar and halacha, but I cringe when I reflect on my behavior during college and immediately post-college. I was much more self-centered to the point where I essentially never considered the impact of my actions or words on others, and certainly caused pain to those around me much more frequently.

This caused me enough embarrassment that when I started blogging about Jewish things, about the lofty concepts of not gossiping, of judging favorably, and so on, I would imagine anyone who knew me from before looking askance at my words and saying “who does she think she is? We remember what she was like, we know how she acted.” For years I hesitated to connect with anyone from my “past life,” I was so ashamed at how I had behaved, how unthinking and insensitive and selfish I had been.

When I was in the process of converting to Judaism, someone told me an anecdote of a potential convert who decided against converting because of the pain it would have caused her parents. On hearing that anecdote, I realized two things: 1) that I had not once considered the impact of my conversion on my parents. I had not thought about how it would affect their holidays, their relationship with their grandchildren, or their relationship with me. And 2) that I would still choose to convert regardless of that impact. And I felt guilty for that.

Thankfully, because my parents are wonderful, wonderful people, our relationship has flourished despite the differences in our lifestyles. I credit Judaism with helping me come out of my self-centered mindset and learn to be more considerate. I still have a considerable amount of work to do in that area, but at least I feel I am moving in the right direction.

And thankfully, because self-awareness is also something I have learned over the past ten years, I have learned to not beat myself up for how I behaved during college. Learning Pirkei Avos (the Ethics of the Fathers), Mishlei (Proverbs), general Mussar, and programs like Rabbi Nivin’s chabura have driven me to be more honest with myself about my feelings, my motivations, my failings and my strengths. I have learned, slowly, slowly, not to try to be perfect, but to do the best I can with what I have to work with.

After ten years I am indebted to an innumerable amount of people. So many people have been unfathomable generous and patient with me as I grew in my Jewishness and in my own personal development. The community in St. Louis, where I started learning about Judaism, was warm and supportive.

Even though I was far, far from behaving in a refined way, before I understood any of the social nuances, families opened their homes to me. Parents let me watch their children. Organizations gave me jobs. And despite my awkwardness or lack of knowledge, people treated me with decency.

Sometimes I laugh when I think about how the current me might hesitate before opening my home to my past self, and then I am even more deeply humbled and grateful to those who gave me a chance, who taught me, who didn’t turn me away even though I was very rough around the edges.

I was also privileged to learn at Neve Yerushalayim for a whole year. This experience was so invaluable, both for the level of learning I was able to do and also for the friends with whom I connected during my time there. There is also the general connectedness I feel with anyone who spent time at that remarkable institution.

Now, after ten years of observance, I find myself in the wonderful position of being able to give back, to make meals for new families who are moving in, to contribute my time to my children’s schools, to have people stay in my house for Shabbos, to host guests for meals. It’s astonishing to me that I am now the kind of person who I went to when I was first becoming observant.

After ten years I have passed through my “drinking the kool-aid” phase, where I blindly accepted everything I heard from anyone more to the right of me as completely immutable. Where I was of the mindset that the way I was doing Judaism was the only way, and everyone else was wrong, and I felt sorry for them.

What chutzpah! But I can see how it minimized the cognitive dissonance I could have experienced going through such a major transition.

Thankfully, I have since learned to see the value of all Jews, not just ones who are exactly like me. I’ve learned to see how every Jew, no matter what their relationship (or lack thereof) with Judaism, is someone I’m related to, and is someone I can learn from, someone who is providing a service to the world in some way, whether it’s giving to the world or providing an opportunity to be a giver.

After ten years, I am more able to see the nuance in Jewish life, seeing the gray and not just the black and white. To see that even in my own life, there are areas where I can be more lenient with myself without it meaning that I’m not “being a good Jew.”

After ten years I’ve had plenty of opportunity to look at the outside world and feel pangs at the varieties of restaurants, literature, music, art, etc. Our observant community is smaller, there are less people to pool their talents into these areas, and there are more religious and communal obligations which can make devoting time to art more difficult.

Over the years I have chafed at the restrictions I brought upon myself. I have wondered if it’s worth it as I have come to recognize the struggles that come with being idealistic about Judaism in a less than idealistic world.

But despite whatever disillusionment I’ve experienced, I still see the power of communal support, of the connection with others who are, generally speaking, on the same page. At least in the same book. I see the beauty of tradition and the sweetness of the simplicity of the songs and books. I see the beauty in my sons singing Acheinu, in my daughter singing Uncle Moishy. I could look at the same aspects of frum life unfavorably, but I think the positives do outweigh the negatives.

I also think that once immersed in a community, any community, it’s natural to look for the lack, to look for what could be improved. And there is definitely what to be improved. But that critical eye needs to be balanced with the benefits and the positivity. And that will be different for everyone.

I don’t know what path my children will take in life, but I’m glad that this is the foundation I’m giving them, and I hope I will be able to give it to them in a way that no matter where life takes them, they will be happy, healthy, productive people.

After ten years, I’m comfortable in the ritual of daily Jewish life, so much so that I have to strive to remember the sparks of inspiration that I so often felt during those first heady years. Sometimes I am dismayed at how easily my spiritual acts have become rote. When I was first beginning my journey, I looked askance at those who practiced their Judaism unthinkingly. How amusing that now I find myself in the position of someone I once scoffed at.

While it does take more effort now to connect to my initial inspiration of Judaism, I can appreciate that by becoming natural and comfortable with the details of observance, I am able to contemplate different aspects of Jewish life. I am able to be part of the larger community without being hyperconscious of every little nuance and detail of ritual observance.

Another upside to observance becoming second nature is that it is a sign of integration of Jewishness. I no longer think of myself as a convert, just as a Jew. I don’t deny my past (obviously), but it is not the defining feature of my identity.

After ten years I still don’t know the words to Acheinu.

After ten years I finally know the words to Svivon.

After ten years I know that FFB (frum from birth) Jews don’t know everything about Judaism, and don’t always pronounce things right in Hebrew either (I’m looking at you, Tehillim).

After another ten years I hope I will find myself still growing and learning, and hopefully you will find yourself there as well.

25 thoughts on “Ten Years of Being a Jew”